Excerpt:  "... The problem was traced, and found to stem from the misuse of hormones  in dairy cows.  When Dr. Saenz was asked how she could be certain the  babies and children were contaminated with hormones from milk rather  than from some other source, she replied simply:  "When we take our  young  patients off... fresh milk, their symptoms usually regress."

Along with China, the U.S. is today one of the few countries in the  world that still allows bovine growth hormones to be injected into dairy  cows.  Though banned in Canada, Japan, Australia, New Zealand and most  of Europe, the use of these hormones in U.S. dairy is not only legal,  it's routine in all 50 states.

The U.S. dairy industry assures us that this is not a problem. [???]  But  there is a very real problem, and its name is Insulin-like Growth  Factor-1 (IGF-1).  Monsanto's own studies, as well as those of Eli Lilly  & Co., have found a 10-fold increase in IGF-1 levels in the milk of  cows who have been injected with bovine growth hormone (BGH).

Why is that a problem?  A report by the European Commission's  authoritative international 16-member scientific committee not only  confirmed that excessive levels of IGF-1 are always found in the milk of  cows injected with BGH.  It also concluded that excess levels of IGF-1  pose serious risks of breast, colon and prostate cancer.

How serious is the increased risk?  According to an article in the May 9, 1998  issue of the medical journal The Lancet,  women with even a relatively small increase in blood levels of IGF-1  are up to seven times more likely to develop breast cancer than women  with lower levels.

IGF-1 that is consumed by human beings in dairy products is rapidly  absorbed into the bloodstream.  It isn't destroyed by human digestion.   And pasteurization is no help.  In fact, the pasteurization process  actually increases IGF-1 levels in milk.
Posted by GMO Free World at 9:49 PM 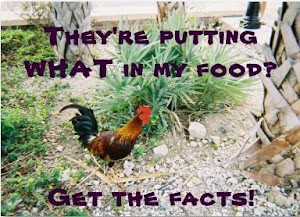 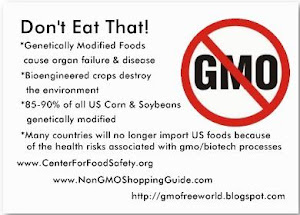